How to Install Etcher on Ubuntu

Home » SysAdmin » How to Install Etcher on Ubuntu

Etcher (also known by its full name, balenaEtcher) is a free, open-source image flasher, a utility for creating bootable SD cards or USB flash drives from .img and .iso files. Simple and user-friendly, Etcher is a good choice even for those who are not particularly tech-savvy.

In this tutorial, you will learn how to install Etcher on Ubuntu using the AppImage format or command line interface. 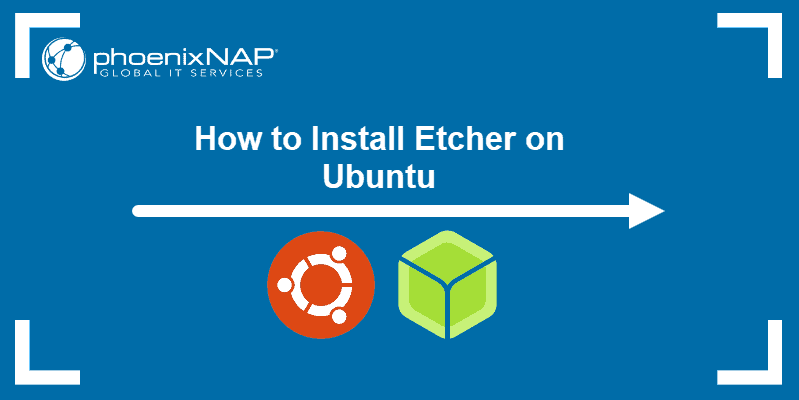 Note: Etcher is an easy way to write a Linux image on an SD card of USB flash.

Etcher is available for download as an AppImage, a portable software distribution format. AppImage makes it easy to run applications without having to go through a complicated installation process.

The following steps will help you run Etcher from its AppImage.

Visit Etcher’s official website and download the AppImage for Linux. Since the 18.04 edition, Ubuntu supports only 64-bit architecture, so choose the x64 version. 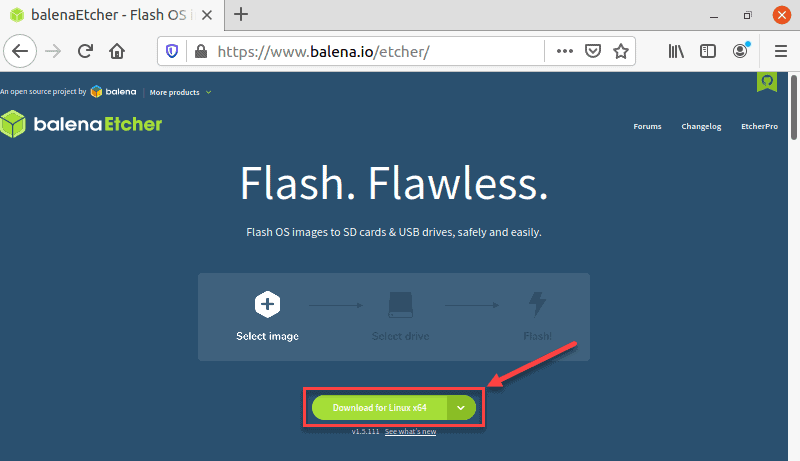 1. Navigate to the location on your drive where you downloaded the .zip file containing AppImage.

3. The .zip file extracts to a folder. Navigate to that folder.

1. Right-click the file and select Properties.

3. In the Execute section of the Permissions tab, check the Allow executing file as a program check box. 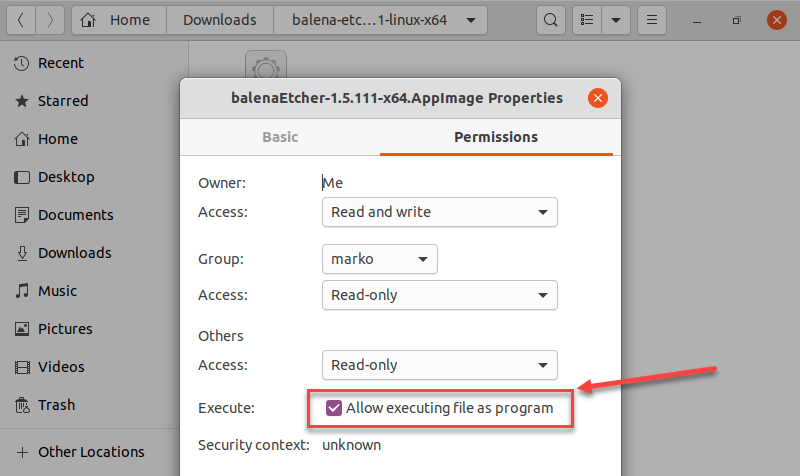 After you give the AppImage permission to run as an application, all you have to do is double-click the app icon and Etcher will start.

You may prefer to install Etcher as any other software and receive automatic future updates. In that case, install the program using the apt package manager.

Add Etcher’s repository to the list of repositories from which Ubuntu retrieves application files. In the console, type the following command:

Ubuntu will confirm the addition of the repository:

Step 2: Add the repository key to authenticate the package source

Next, use apt-key to add Etcher’s repository key to the trusted list. To do this, type the following:

Now you can proceed with installing Etcher using apt.

2. Next, install the package:

4. Wait for the installation to finish and run Etcher by finding it in the list of your Ubuntu applications. Alternatively, start it by typing balena-etcher-electron in the command line.

Note: If you are one of the many Ubuntu users that are still not sure about the difference between apt and apt-get, read our article APT Vs APT-GET.

This tutorial presented two simple methods to install Etcher, a popular bootable media creator. AppImage will come in handy if you need Etcher for a single use. On the other hand, if you plan to use the application regularly, you may want to perform a full installation via the command line.

Marko Aleksic
Marko Aleksić is a Technical Writer at phoenixNAP. His innate curiosity regarding all things IT, combined with over a decade long background in writing, teaching and working in IT-related fields, led him to technical writing, where he has an opportunity to employ his skills and make technology less daunting to everyone.
Next you should read
Bare Metal Servers SysAdmin
How to Format USB Drives in Linux
USB formatting is done for several reasons, such as deleting data or...
Read more
SysAdmin Web Servers
How to Upgrade to Ubuntu 20.04
Ubuntu 20.04 (Focal Fossa) is the newest Ubuntu LTS release. You can upgrade to...
Read more
SysAdmin Web Servers
How to Install CentOS 8 {with Screenshots}
Since there is no way to upgrade from CentOS 7 to CentOS 8...
Read more
SysAdmin
How to use apt Package Manager on Ubuntu Linux
In Linux, special tools were developed for managing applications. Application...
Read more
© 2021 Copyright phoenixNAP | Global IT Services. All Rights Reserved.