Single vs Dual Processor Servers, Which Is Right For You?

Home » Bare Metal Servers » Single vs Dual Processor Servers, Which Is Right For You?

In the market for a dedicated or bare metal server? There is an abundance of configurations to choose from.

It is critical to determine a server configuration that meets your demands.

The backbone of any server is the number of CPUs that will power it, as well as the actual model and the type of the CPU. From that point, you add the needed amount of RAM, storage and other options that your use case requires.

After reading this article, you should be able to understand the differences between a single processor and a dual processor server. If you are planning to build a bare metal environment for your workload, one of the questions is whether to go for a single or dual processor setup.

This article should steer you towards making a proper decision for your future infrastructure needs. 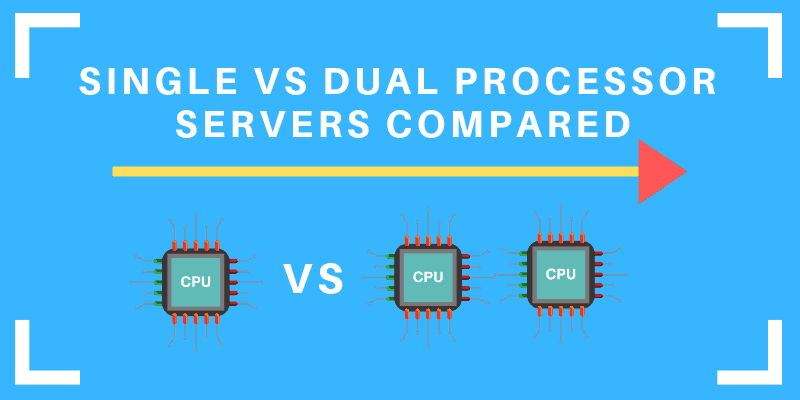 Differences Between a CPU, Core, and Threads

Back in the day when computers started entering every aspect of our lives, we could not even imagine a multi-core CPU. It was a battle of high CPU core clock speeds. The higher the clock speed, the faster a CPU could process information.

When single-core CPUs were no longer sufficient, manufacturers started developing chips with multiple cores and threads. Soon enough, we started seeing servers with multiple CPUs on one motherboard. But what is the difference between a CPU, a core, and a thread? Read along for a brief overview.

What is a CPU?

A CPU (Central Processing Unit) is a piece of hardware responsible for executing tasks from other parts of a computer.

Single core CPUs were able to handle only one set of instructions at a time. Virtually all modern CPUs contain multiple cores now. This enables the execution of multiple tasks at the same time.

What is a CPU Core?

A Core is a physical part of a CPU. Cores act like processors within a single CPU chip. The more cores a CPU has, the more tasks it can perform simultaneously. 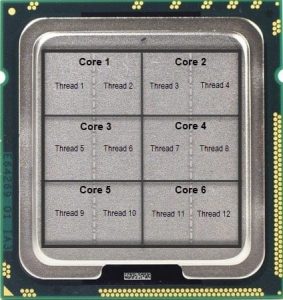 One core can perform one task at a time while other cores handle other tasks the system assigns. This way, the overall performance is substantially improved when compared to old single-core CPUs. There are also logical cores that function as separate threads within a core. While they boost performance, logical cores are not a match for physical cores.

What are CPU Threads?

Threads are like paths your computer can take to process information.

If a CPU has six cores with two threads per core, that means there are twelve paths for information to be processed.

The main difference between threads and physical cores is that two threads cannot operate in parallel. While two physical cores can simultaneously perform two tasks, one core alternates between the threads. This happens fast so that it appears that true multitasking takes place.

Single processor servers run on a motherboard with one socket for a CPU. This means that the highest core-count CPU available on the market determines the maximum core-count per server. On the bright side, today’s CPU market offers many high-performance units that can handle intensive workloads.

The majority of recent single processor servers utilize CPUs that belong to Intel® Xeon® E family, the successor to the Xeon E3 family. The most cost-effective choice is the Intel® Xeon® E-2186G CPU from the latest Coffee Lake product line. With 6 cores clocked at 3.8 GHz (4.7 GHz Turbo Boost), 12 threads and 128GB ECC RAM support (after a bios update, coming in the first quarter) you can run multiple different services 24/7 without any issues.

Use Cases for Single Processor Servers

The advance of CPU technology allowed single processor servers to handle intensive workloads. This strictly depends on the model of the CPU that powers the servers as well as other components, such as the amount of RAM.

Cost-effective single processor servers can provide machines powerful enough for a development and test environment for your team of programmers. In this segment, you can also expect to set up your own DNS server.

The single processor server lineup in the middle segment is also diverse. A server like this still won’t break your bank but will manage to run all services mentioned above, but for a larger organization. Additionally, mid-range machines are a good fit for a moderate volume webshop or smaller online games server.

There are many different applications for collaborative servers ranging from interactive 3D experiences to project management tools.

If the budget allows for a top-spec single processor server, you can create a high core-count machine for more intensive workloads. Some of those applications include certain scientific simulations and statistical computations.

Other than that, large volume websites and online stores can effectively run on these robust servers. You can also create a smaller virtual environment and make a multi-purpose server using one unit.

The most apparent distinction between single and dual processor servers is that the motherboard has two CPU sockets instead of one.

This is followed by additional benefits such as the massive amount of PCI lanes, two separate sets of cache memory and two sets of RAM slots. If the specific motherboard has 24 memory slots, 12 slots belong to the first CPU and the other 12 to the other CPU. In cases where only one CPU slot is occupied, the CPU cannot use the other set of RAM sticks. This rarely happens since dual processor servers always have both slots occupied. The Intel® Xeon® Gold Processor lineup is the most cost-effective option for dual processor setups. These include Intel® Xeon® Gold 5118 or Intel® Xeon® Gold 6130 if you need more cache and higher clock speeds. 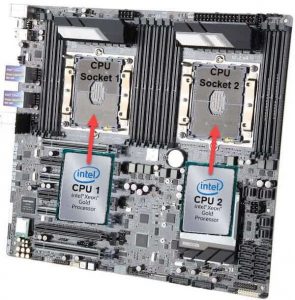 One thing to bear in mind about dual processor servers is the presence of a necessary latency in such systems. This refers to the compute tasks that require the same data sets. To efficiently share the available resources and avoid interrupting each other, there is a need for NUMA (non-uniform memory access). This helps with assigning available memory and devices to each CPU making the latency times as low as possible. But, in the workloads intended for these servers, this is not an issue.

Dual processor servers and multiprocessor systems, in general, are the best options for space-restricted environments. When a business requires as much compute power as possible in a single unit, they need to use multi-socket setups to fit a large number of servers in a constricted space.

Quite often dual processor servers contain those top of the line processor chips. This makes them suitable for virtually every market segment and business use case. Note that typical small business applications will not benefit from the high core-count.

Where these servers really shine is in multi-threaded CPU intensive applications such as scientific high precision computations and simulations. The same goes for machine and deep learning, render farms and similar HPC deployments where an extreme amount of CPU calculation takes place.

Environments using a large database tasked with numerous simultaneous queries take advantage of servers powered by two CPUs and as many cores as possible. The more cores are available, the more database tasks a system can handle. Dual processor servers can even handle multiple databases on a single machine due to the sheer number of processing power.

These servers shine when they serve as the basis for a virtual environment or the backbone of a server cluster. With up to 56 cores and double the threads, you can even assign physical cores to your virtual machines for better performance and stability.

You may have noticed that we did not create a classification of dual CPU servers in different segments. The main reason is if you are in the market for a dual CPU server, you are already deep in the high segment of the computing world. Still, providers have outlet offers for dual CPU machines where you can lease a bare metal server without breaking the bank.

As it is usually the case, the more, the better. Higher core-count machines certainly outperform those servers with six or eight cores and a single CPU chip. However, not everything is so simple.

While dual CPU setups pack enormous core counts and outshine single processor servers by a large margin, some tests have shown only a marginal performance increase over single CPU configurations with similar core-count and clock speeds per chip. This refers to the circumstances where two CPUs worked on the same data at the same time.

On the other hand, we see immense performance boosts in dual processor servers when the workload is optimized for setups like these. This is especially true when CPUs carry out intensive multi-threaded tasks. One of them is abstracting the resources into virtual machines that work on separate things at the same time.

The sheer processor speed and core-count is not always detrimental. Dual processor servers support much more RAM than it is the case with single processor servers. For example, Intel® Xeon® Gold 5118 Scalable Processors has a maximum declared memory size of 768GB. On the other hand, the Xeon E-2100 processor line supports up to 128GB of RAM after BIOS update.

To affirm the multiprocessor server performance precedence over single processor setups, the first half of 2019 will bring Intel® Optane

There is no magic formula on how to determine if you need a low-end single processor server or a dual processor monster. There are multiple factors that play a major role in this decision. This also depends on whether you want to lease a server or buy one. In today’s market, it is usually more cost-effective to lease a server than build an in-house data-center. The reason is the amount of work involved in setting up the proper air conditioning, power, cabling and everything else you need to run a stable data center.

Here are some of the guidelines for determining the right bare metal server for your business:

Single processor servers hold a large portion of today’s market. With massive core-count CPU chips, it may seem that dual processor servers are best suited for enterprise environments and data centers. Those buildings need to house as many cores per unit as possible to save space.

High-performance servers underpin successful business operations and drive forward the scientific research and development. That is why it is essential to choose the proper server for your IT infrastructure. If you need any help in making this decision, you may want to turn to professionals. You can also contact phoenixNAP experts directly for assistance in choosing the right server for your workload.

Goran Jevtic
Goran combines his leadership skills and passion for research, writing, and technology as a Technical Writing Team Lead at phoenixNAP. Working with multiple departments and on various projects, he has developed an extraordinary understanding of cloud and virtualization technology trends and best practices.
Next you should read
Backup and Recovery Bare Metal Servers
Raid Levels and Types: Advantages and Disadvantages of 0,1,5,10
RAID (redundant array of independent disks) is a setup consisting of multiple disks for data storage. They...
Read more
SysAdmin Web Servers
7 Best Website Speed and Performance Testing Tools
There are programs that answer two of the most common questions web administrators and SEO's keep asking when...
Read more
Networking Security Web Servers
Best Tools to Monitor Network Bandwidth on a Linux Server
There are many different tools for monitoring network traffic on a Linux server. Each option has its...
Read more
Bare Metal Servers
NVMe vs SATA vs M.2 SSD: Storage Comparison
Mechanical hard drives were once a major bottleneck on every computer system with speeds capped around 150...
Read more
© 2022 Copyright phoenixNAP | Global IT Services. All Rights Reserved.